Six months into COVID lockdown the Chitown Wargamers have been gaming occasionally and I have been neglecting the blog!
This past Friday Myles, Mark, Ed and I got together to game a scenario from my Chain of Command: España "tapas-sized" campaign, Guadalajara no es Abisinia, that covers the Guadalajara campaign from March 8th to 23rd 1937. I started working on this at the beginning of June and have been tweaking it over the Summer.
This scenario covers the third day of the Nationalist offensive where the CTV is pushing into the town of Brihuega. Historically they overran the town with support from Flame-throwing CV33s. For the game tonight we have three Nationalist platoons; CTV Tank platoon of three CV33s, CTV Infantry and Falangist Militia. For the Republicans there were two platoons consisting of the Garibaldi Battalion and a regular Ejército Popular de la República platoon (EPR). 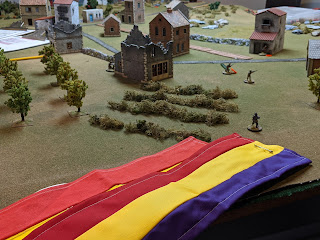 The Nationalist plan was to attack in a pincer from both sides of town with the CTV armor supporting the Falangists on the left while the CTV infantry came from right to pin the Garibaldis. Early on Ed was able to run the Falangists up to the Republican flank with his infantry and cavalry to contest one of the Republican jump off points preventing any more support to come up.

Mark revealed his Soviet aid early, dropping a 45mm Anti-tank gun inside the town to start shooting towards the CV33s. Unfortunately for him, all his shots missed over the tops of the Italian tankettes. 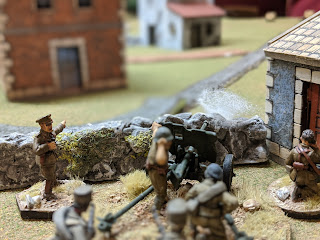 Ed's Falangist flanking maneuver paid off as Mark was unable to deploy anything in response. Which left the anti-tank gun by itself to be overrun by some aggressive Nationalist cavalry. Knocking his force morale down greatly leaving Myles' Garibaldis with a lot of work to do to hold the town. 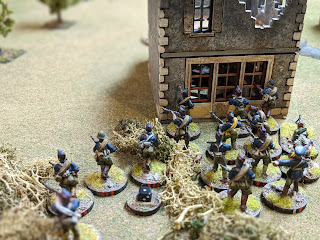 Meanwhile on the other flank the CTV infantry were taking their time slowly coming up while being suppressed by the Garibaldis. The Nationalists managed to end the turn using a Chain dice and dropped the EPR platoon's morale down to 1 through loss of a jump-off point. At this point we called the game a decisive Nationalist victory as the Garibaldis decided to withdraw from Brihuega before the CV33s could catch up with the Nationalist infantry. 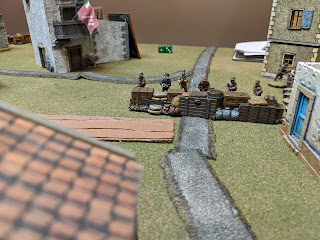 Overall it was a fun game and nice to break out our Spanish Civil War forces for the first time in a while. Ed's aggressive cavalry charge paid off as Mark had purchased several entrenchments that if he had gotten down on his right would have bogged down our entire attack on the flank.

I am looking forward to continuing to work on the campaign guide to try and get it completed before the end of the year. Hopefully we'll be play-testing some more scenarios that may pop up here on the blog in the next few weeks.