For something a little different, we have a Bolt Action tournament AAR.  This was held on Saturday November 5th.  The venue is a game store in Chicago called Dice Dojo located on north Broadway in the Edgewater neighborhood.  The main floor is composed of open gaming tables on one side and retail space on the other mostly featuring board games and collectible card games.  The tournament itself was held in the basement.  They have around a dozen 4 x 6 tables and an absolutely staggering amount of community terrain and miniatures along the walls.

The tournament itself was an escalation format.  That means each round was more points than the previous round.  It was 3 rounds at 450, 750 and 1000 points.  This format has a few advantages.  The first is an overall shorter tournament.  First game was at 10am and we were done by 6pm.  The "standard" sized game is typically between 1,000 and 1,250.

It also means you can't optimize an army for a specific points value.  Some armies are stronger when smaller,  others when larger.  This helps limit that.
And finally you get more variety because people feel a little more open to experimenting.
It was basically swiss pairings.  I was running my 92nd Buffalo Soldiers which are bog standard US riflemen.  I relied on large squads to carry my day.  My vehicles were limited to a machine gun jeep at 450, a Greyhound at 750 and both a  Greyhound and 75mm M4 at 1,000.
My first game was against Al running some sort of mounted French cavalry at 450 points.  He had a couple decent sized cavalry units, a small engineer squad with flamethrower, a motorcycle / sidecar with an ATG and finally an FT17 with a machine gun.  The scenario featured a paradrop squad for each of us on turn one.  He flame throwered one of my squads out of existence with it. I then landed next to him and shot him out of existence with my dropped squad!  Lots of maneuver and fire the rest of the game with a couple of desperate close combats.  Veteran cavalry in close combat is brutally tough.  It was back and forth but he pulled away at the end, partially because I screwed up the mission requirements.  Doh!  Fun game nonetheless and he came in second place. Not a great picture, but you can see a couple of my lonely units after the game after they realized they moved onto the wrong portion of the board to score maximum points.  Oh well :) 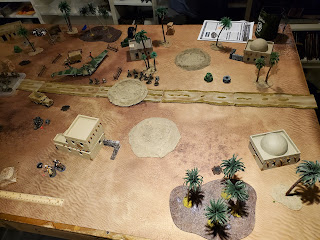 The second game was against Jim at 750.  He was using a British platoon fully mounted in 3 Bren carriers, and also included a Sherman.  Eeek.  It was an open board so I was very nervous.  Remember I mentioned people like to experiment?  He tried Regular troops instead of Veteran as 5 men squads loaded into his carriers.  He didn't realize how vulnerable his small squads were and additionally played rather  aggressively.  It didn't help that I got lucky and destroyed a Bren carrier with an 82mm mortar, forcing his troops out well within rifle range of two large squads.  Ouch.  I ended up killing something like 8 out of his 10 order dice without losing any of my own units.  These games never feel very good whether on the winning side or losing side.  Jim was really good about it though and chalked it up to learning a new way how not to run his British. My last game was against Zack at 1k points.  He was running some sort of crazy Polish Partisan army with some crazy rules and 16 order dice to my 11.  I don't have a picture, but it was one of the more built up boards with a fairly significant town covering half the board, and fields surrounded by stone walls covering the other half.  The Mission orders were to occupy the location of a plane that would crash on turn 4 creating a 3" crater.  Honest to God, the stupid plane crashed on top of my bazooka unit destroying it. You can't make this up!  On the bright side the location was in the middle of the town and slightly better for me as I had more major units near it including 3 of my 4 infantry squads, all my minor units and my Sherman.  I had gotten lucky the second and third turns eliminating a couple of Zacks larger squads that would have been near the crash site.  The old chestnut about it being better to be lucky than good is certainly true!  In any case, I thought I had the game on turn 6 as I moved a nearly full strength squad onto the crater.  But that also moved me within 6" of one of his booby traps, which was one of his crazy army rules.  I knew it was there, but it would only activate on a 6.  No problem!  He rolled the necessary 6 and the whole freaking squad vaporized with 3D6 hits.  Not even dogs tags were left behind.  He moved a single Forward Observer onto it to end the turn.  Queue the final role of the game with a 50/50 to end the game or play a final turn 7.
Lucky me, I got one more turn and pushed another big squad onto it eliminating his poor Observer who never realized what rolled over him.  Zack made a last ditch effort by firing a rocket launcher that potentially hit every unit within 6" of the target point by targeting an adjacent building.  He had literally missed over 20 die rolls at that point to hit one of my units.  No lie, the poor guys was completely robbed by it not hitting a single time.  Until now.  We each had multiple squads at risk.  He missed 4 of my units but hit two of his own, destroying both.  It was honestly rather funny and we were both shaking our heads at the end.  We both seriously enjoyed the game as we both were in a position to win at the end.  I ended up killing something like 10 units to 3 or 4 units lost of my 11.
Two wins and the huge unit kill differentials were good enough for 4th place out of 16.  It was a very good prize selection and I grabbed an old Armored Fury box which contained 3 x M4 Shermans, 2 x Panthers, a mini Bolt Action rules and a Tank Wars rules.
The tables looked good but I thought slightly on the open side.  That apparently was by design to limit the power of close assault monster units.  The TO was Shane and he did a very good job.  The rounds moved smartly and he made some quick rulings on a couple of my games where we either weren't sure of the rule.  Overall it was a great experience.  I'm definitely going to sign up for the next local tournament, which will be at Polar Vortex next February.
Final standings are here at Best Coast Pairings
Posted by Jeff at 11:04 PM No comments: