It's been a while since we've posted something up, so time to fix that!
Mark, Dan and I got together last night to try out a new game (for us).  I've been an inveterate rules collector for ages and ages, and the advent of Wargames Vault has only made it worse.  One of the series that I've picked up along the way is Fistful of Lead (FFoL) by Jaye Wiley of Wiley Games.  It started as a wild west cowboy game, but as of recent years, he's been expanding the reach of his game system by creating what are essentially versions dedicated to specific eras.  I think his first release after the original cowboy version was Horse & Musket.  Since then, he revamped and released the core rules and has been rereleasing some of his early works so they all align with his core rules.  H&M was re-released in 2021.
At it's heart, FFoL is a skirmish game.  You create detachments of around 5 or so figures for each player.  Each figure is equipped with weapons and assigned one or more traits, which generally upgrade or enhance the figure in some manner.  There are in excess of 75 different traits, although most are very simple in application.
Gameplay is via a standard deck of 52 cards.  At the start of a turn, you give each player one card for each figure they have on the table.  Order of figure activation is determined by the cards, starting with Kings, then Queens, then Jacks and so on.  Whomever has a King puts it down, and order of figure activation is further determined by suit, starting with the Spades, Hearts, Diamonds and finally Clubs.  So if one player has the King of Hearts and another the King of Clubs, the player with the King of Hearts would pick one of his un-activated figures and perform two actions from those available.  Once that figure resolved its actions, the player with the King of Clubs would pick an un-activated figure and do the same.
There is one twist which makes the card activation more interesting.  There are some cards that give special traits or abilities on the figure played.  For example, the Queen of Hearts used to activate a figure also removes one wound for free.  Playing a 7 on a figure allows it a re-roll on a single die during its activation.  And finally, an Ace allows the player to use it as any card!  It makes you really think about what you need to accomplish!  Actions are your standard skirmish fair with Moving, Shooting, Aiming, Reloading, Switching Weapons, etc. So much for the background, onto the game.
Retrieve the Letter!
There would be three detachments, each playing for themselves.  There were two Cossack, and one Polish Haiduk detachments.  Each detachment had a leader, a second and three regulars.  There were a variety of weapons, mostly swords, pistols and muskets based on what the figures were actually equipped with.  The picture below was the starting positions.  This is facing North (for future reference).  My Cossack detachment started in the South, and included the only mounted figure.  Dan and the Haiduks were in the East, and Mark and his Cossacks were in the North West. 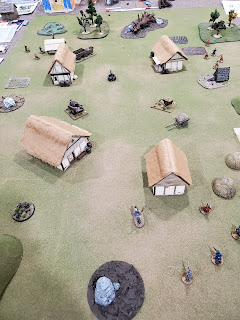 Each building (including the shed at the top left, and the chicken coop at the top right) had something to be found.  In order to find whatever was in the building, you had to perform a "hard task".  Which meant spend one of your actions in the building and roll an 8+.  There were 6 different things that could be found based on drawing from a set of 6 cards that were faced down:
ace - Peasant treasure worth 1 point
2 - Peasant treasure worth 1 point
3 - Peasant treasure worth 1 point
4 - Village treasure worth 3 points
5 - Church silver worth 4 points
6 - Letter!!!!  worth 6 points
If you drew an ace through 5, you called for a treasure chest.  To claim your loot, you had to carry it off the board in the chest.  If you drew the 6, no chest. So everyone knew when the Letter was found.
If you rolled a "1" while searching, some bad happened and you would be immediately attacked!  Roll a D6 and refer to the chart:
1 - Dog attack.  1 wound, D8 attack.
2 - Angry villager w/Rock. 1 wound, D8 attack.
3 - Angry drunk revelers. 1 wound each, D8 attack armed with beer steins (as Club)
4 - 2 Dogs attack.  1 wound each.  D8 attack.
5 - Angry villager w/Rock. 1 wound. D10 attack.
6 - Angry Cossack w/Sword. 1 wound.   D10 attack.
Sadly, we never rolled a 1 during searching (or at least didn't notice while playing).
Each detachment pushed up towards its nearest buildings, taking an occasional pot-shot at each other but doing no damage.  Early on you can see the Haiduks facing down Mark's Cossacks and plinking back and forth between the buildings and cart.  Chests were found rather quickly in this area, but no Letter. 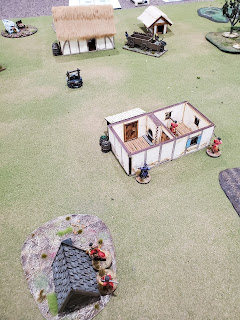 While that was going on, I pushed my leader up towards Mark and his Cossacks.  That ultimately ended rather poorly for me as my leader got knocked off his horse, and finally cut down as he got mobbed.  Luckily all was not lost as my Second found the Letter!  I like to think that my Leader was buying time for him to run with the letter!!! 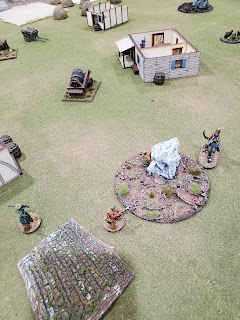 Maybe a coward, but I took the letter and ran for the safety of the board edge.  Mark chased, but the Bluderbuss (Orange guy) didn't have the range to reach, and his other figure wasn't loaded.  Score 6 points for the good guys!!! 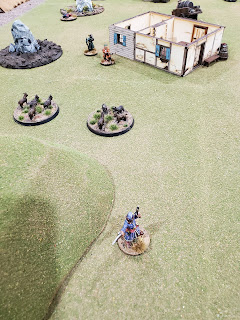 Unfortunately things were starting to look grim for me.  Mark and Dan were both flooding south.  You can see Mark's Cossacks in the foreground and Dan in the background.  I already had 2 figures taken out (you can see one next to the building) and another off-board.  The Blunderbuss of doom had taken out the guy behind the building, as well as wounding Dan's leader.  By this time he had already crawled around the other side of the building.  Mark had 2 chests, and had already killed 3 or 4 figures so my 6 points from the Letter weren't looking quite so good anymore. 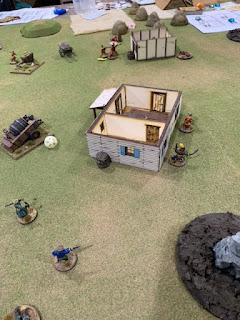 The last few turns ended up in an orgy of destruction with three more of Dan's detachment and two more of Mark's biting the dust in a swirling melee of death.  At that point we called the game.  It was going to be a near run result between Mark and I, but we didn't bother tallying things up.
We agreed the game was a complete success.  FFoL H&M gave a very fun and engaging game.  It gave a really nice feel for the period, with having to consider what to fire, when to swap between loaded weapons and when to swap to sword and charge with a weapon advantage.  We did all this in just over 2 hours without having previously played the game.  This is definitely a keeper and I'll be bringing it out again, and possibly running something at a convention.
Posted by Jeff at 4:09 PM

Email ThisBlogThis!Share to TwitterShare to FacebookShare to Pinterest
Labels: 28mm, Fistful of Lead