Relief of the Sidwar Crossing

Last night, we got together to try out Ospreys "Men Who Would Be Kings" once more, the scenario played out very cinematically and was good fun. The rules are very simple, but keep game going fast, after a few turns in we seemed to not need to use the QRFs very often.

The games character traits given to leaders added a bit of fun when commanding the units and helped build a story during the game.

Somewhere in the mountains of Afghanistan a small detachment of Gurkhas were tasked with escorting the local Colonel's daughter through the Sidwar Valley.

Lead by brave Lt. George Channer, two units of Gurkhas deployed onto the table after sighting a horde of Pathans approaching their position. Desperately waiting for reinforcements to appear on the horizon. 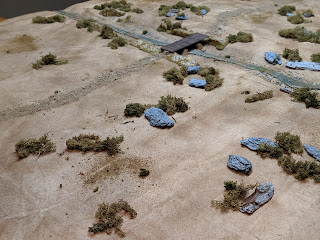 The first turn the Pathans swarmed the board, rushing to reach the Gurkha positions before reinforcements could arrive. 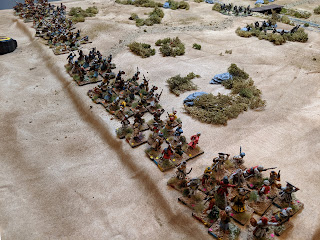 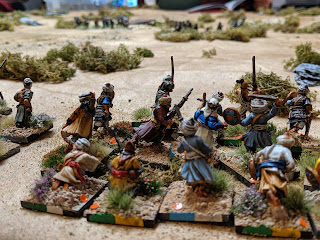 Gurkhas immediately began opening fire at the rushing Pathans, knocking down a few but not slowing the advance. On the left flank Jafar's cavalry charged into the Gurkhas commanded by Lt. Channer and are met with some withering fire. Kahn's rag tag infantry closed the distance to the Gurkhas and assaulted, despite superior numbers they were thrown back twice. But despite their heroic defense, only Sgt. Thapa survived the melee and quickly decided it was time to leave. 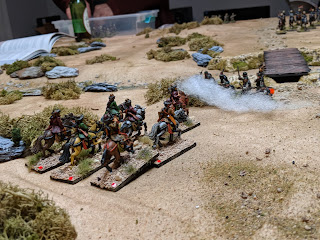 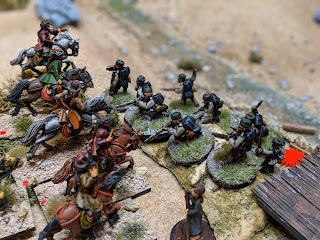 Despite his best attempts to flee, the Pathans caught up to Sgt. Thapa who is cut down in the riverbed as he tried to make it back to his own lines.

By this time, the British relief column has arrived, lead by Lt. Allman, who promptly realizes he left his good riding gloves back at camp and after failing a few activation rolls falls back to the board edge.

While Lt. Allman tries to figure out his damned compass, the Pathan attack on the Gurkha right falters. After beating back the cavalry charge, Jafar fails two unit morale tests in a row and the Pathan's break. Causing panic in the ranks of the tribal infantry. 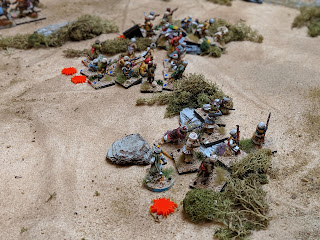 Kahn's forces continuing to try and push towards the bridge and the Colonel's daughter, but quickly meet the now turned around lancers as well as the British foot who gun them down as they try to occupy the riverbed. Khan Bakt "The Merciful" brings shame to himself as he flees from the lancer charge, while Dagar Afzaal "The Gun Enthusiast" and his command are to killed to a man by Lt. Stewart's advancing infantry. 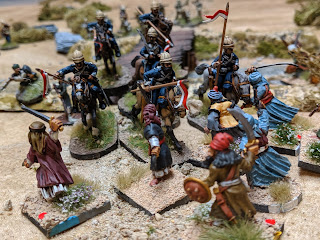 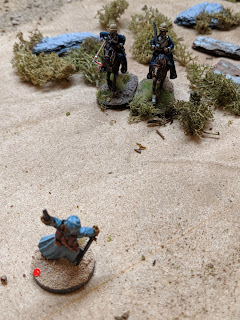 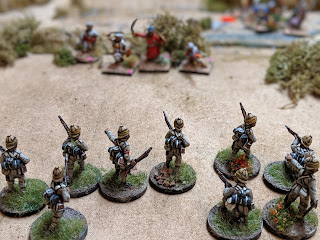 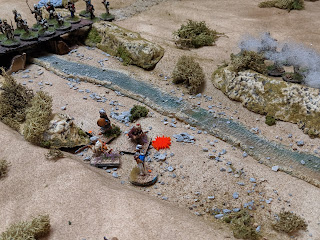 By this point, the Pathans have had enough and decide to retreat. Leaving the badly bloodied Gurkhas on the field, while Lt. Allman claims his brilliant feigned retreat with the Lancers has won the day, he is expected to promoted to Captain shortly.

Email ThisBlogThis!Share to TwitterShare to FacebookShare to Pinterest
Labels: British, Colonial, Men Who Would Be Kings, Pathan